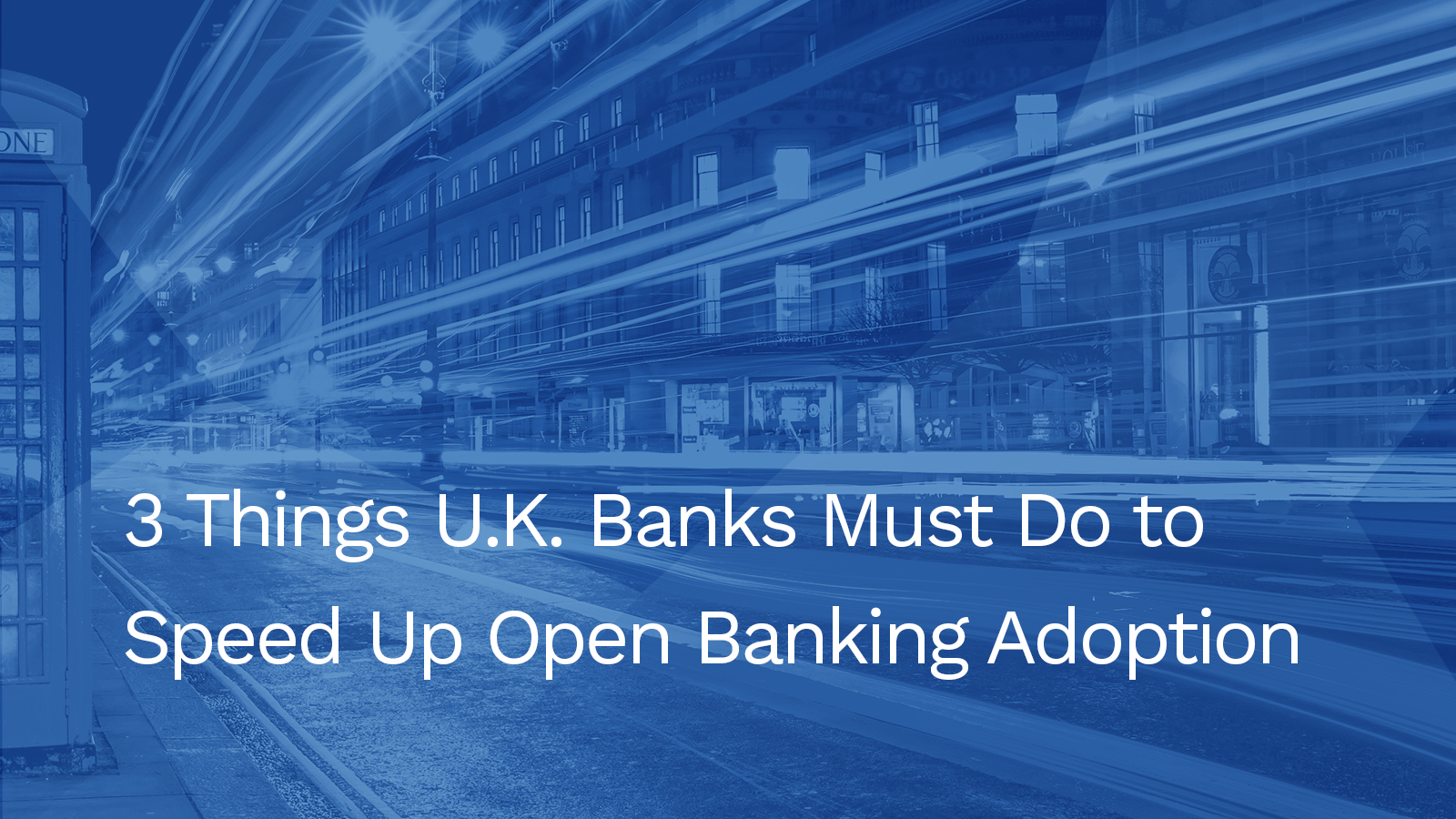 Too many financial institutions have been slow to embrace open banking. Here’s how to get on board quickly.

The U.K. is one of a handful of countries around the world that have embraced open banking. While the government had to push the movement along by forcing the country’s largest banks to give licensed startups access to their proprietary data, an increasing number of financial institutions and clients are interested in open banking opportunities. According to Business Insider, more than 2 million U.K. consumers now use open banking products, and that number is expected to rise.

Despite the increased interest, adoption has been slow, with many banks dragging their heels on deploying open banking–enabling technology. Now’s the time, though, to jump on the bandwagon. The companies that continue to delay will see their market share dwindle as customers move to businesses – whether that’s traditional financial companies or innovative startups – that provide better user experiences.

Moving quickly is a must, but how can a bank with decades-old processes and programs embrace the kind of digital, cloud-based technology it needs to be a prime open banking player? Here’s how to act fast, without sacrificing innovation or opportunities.

Banks aren’t known for their collaboration skills. Many prefer to create their own technologies or develop their own proprietary systems for their clients. But building an application versus buying an existing one is not without its challenges. According to McKinsey, companies that build their own enterprise software projects end up going over budget 45% of the time, while only 56% of software builds deliver on their intended value. Another study found that large IT projects at financial services firms are often delayed, above budget and fail to deliver value.

In today’s world, where customers expect better experiences from the companies they interact with, deploying technology faster and at scale is a must. That’s why many enterprise companies would rather buy existing technology – it’s far more efficient and less costly to purchase an already made product. By buying, you’re getting an application or program that’s been through testing, the kinks have been ironed out and there are some benchmarks as to how it will perform. And, because the technology is already developed, it can be quickly deployed.

Work with a fintech

Open banking only works if financial institutions partner with fintech firms to deliver new programs and client experiences. That is the whole point – there are many innovative startups out there that can offer clients services and tools that banks can’t. A company like FISPAN, for instance, has APIs that can help banks connect their systems into a company’s enterprise resource planning program. That can make it much easier for an institution’s clients to manage payables and receivables and purchase other financial products in near real-time.

These are tools that banks simply can’t create themselves. There’s so much innovation happening right now, and an enormous amount of money pouring into fintech investments – $137.5 billion was invested into global fintech companies in 2019, according to KPMG – that no single bank could ever replicate the technology that’s being developed today. Instead, look for tech that can suit your clients’ needs best. Much of it is already out there, with new apps and APIs being developed every day.

You also can’t have open banking without the developers who are either making new APIs or helping integrate existing ones. Banks, though, must create an environment where those developers can move quickly. Even after two years of open banking, many U.K. institutions are still rolling out new products too slowly – in part because they’re not running their technology teams in an agile, flexible way.

The developer environment is key to open banking success. In an Accenture report on open banking, the company writes: “The extent to which a platform play can be successful depends to a significant degree on the breadth of APIs offered by each player. Many banks are taking steps to engage and support developers through a collaborative ecosystem of resources, communities, hackathons and meetups, and they are starting the journey towards offering non-mandatory APIs.” In other words, give your developers the opportunity to innovate quickly and without the bureaucracy that comes with working at a bank.

U.K. banks have had two years to embrace open banking – the ones that aren’t there yet need to move quickly. Implement these ideas and you’ll be well on your way.

How foreign banks are shaking up commercial banking in Canada

Driven by a combination of regulatory changes and competitive pressure around the globe, open...
Read More