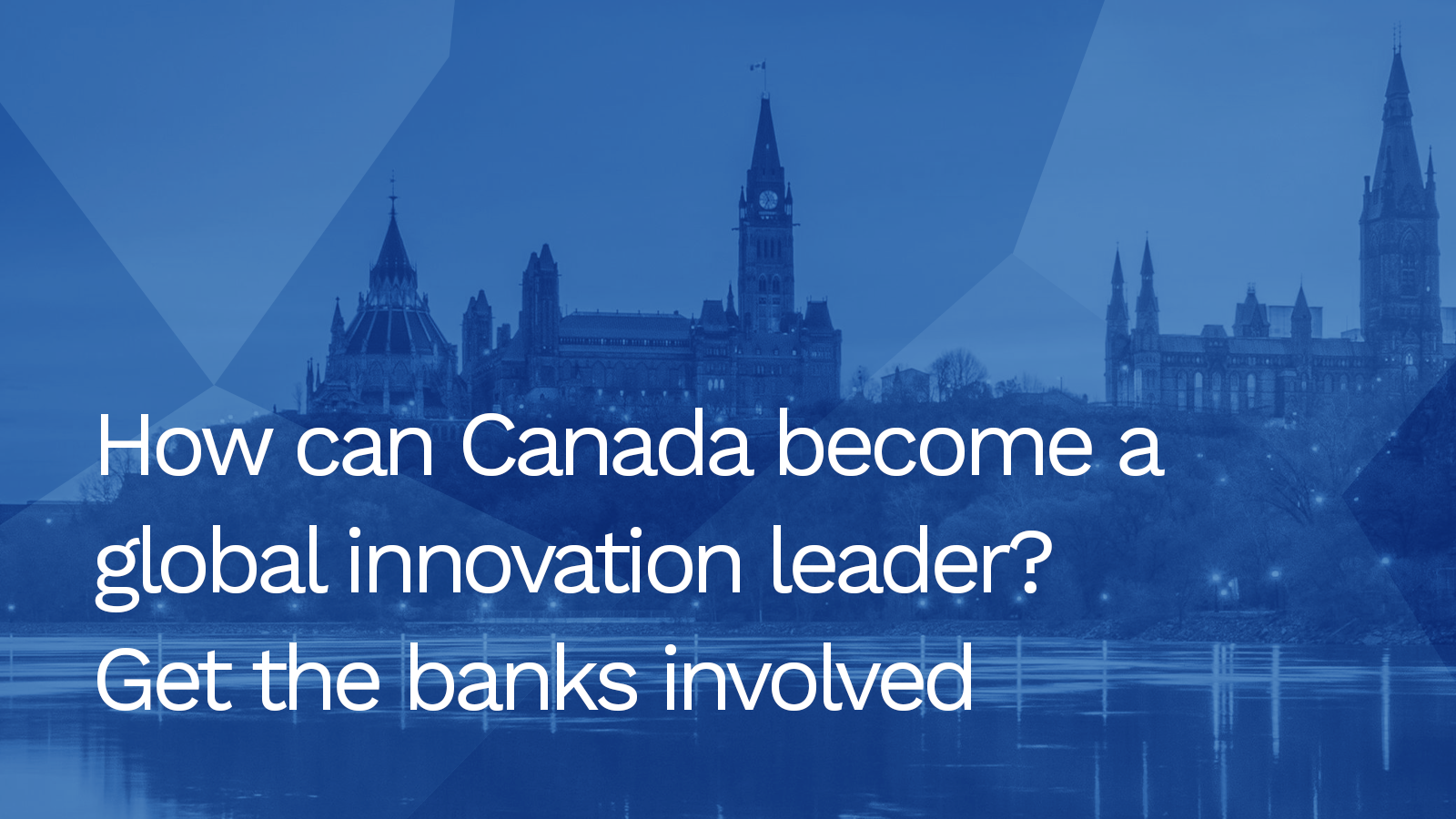 How can Canada become a global innovation leader? Get the banks involved

Our country is falling behind when it comes to technological innovation. Looking to financial institutions may be the answer.

Canada does a lot of things well, but supporting technological innovation is not on its list of accomplishments. Yes, if there was no Research in Motion (now BlackBerry) then maybe there would be no iPhone, and Canadian e-commerce giant Shopify is currently the largest company by market cap on the TSX. Yet, the vast majority of experts agree that when it comes to research and development and general innovation, Canada lags behind most other developed nations.

In a September 2019 speech, Mary Ann Yule, Hewlett Packard Canada’s president, and CEO said that Canada ranks 34th in technological development globally, and spends 1.6% of GDP on R&D, which is below the global average of 2% and less than half of what the U.S. spends. "Our lack of innovation is evident, and can be seen in our dismal R&D investments," said Yule at that year’s Elevate conference in Toronto. Many, many others have said similar things for years.

If there’s ever been a time to invest in innovation, it’s now, in the middle of this global pandemic. Canada needs new sources of revenues, it needs to create new job opportunities, it needs to find ways to jumpstart our economy. If we can improve our own standards of innovation, and even surpass global targets, then we could become a world-leading innovation centre that gets our economic engines revving again. How do we do that? Get the banks involved.

Banks must do more to innovate

Banking is better positioned than any other sector to kickstart a new technological revolution. It has money to invest, it can brush off a failure quickly and it can, at least in theory, implement a success faster than anyone else. Yet, while many banks have said that they’ve been investing money into digital transformation, they’re not doing enough. Aside from being able to deposit a cheque online, Canadian banking hasn’t changed much over the past several years.

Indeed, a Mckinsey and Company report found that, globally, banks allocate just 35% of their information technology budgets to innovation, compared to 70% for fintechs. It’s likely a similar story here. In today’s world, though, where people can order groceries to their home, watch their cab pull up to their door thanks to an app, and create a high-definition video on their way to work, people expect more from their financial institutions. Consumers want to take out a mortgage online or access all their bank accounts in one place. Businesses want the ease of paying numerous vendors at a single time or have more transparent foreign exchange pricing.

Banks have a role to play because commerce drives everything. There’s a reason fintech has become a multi-billion dollar industry – everything ties back to money. Banks, and especially Canadian ones, already touch several aspects of our lives, from insurance to housing, to money management and more. What if the banks could make it easier for a young entrepreneur to borrow money from a fintech that specializes in loans for, say, startup design companies, or if they were able to share information about a customer with another business (as long as the customer allows them to share that info) and help that company increase its sales.

Of course, there’s nothing stopping them, besides a fear that if they give people what they want, then they may take their business elsewhere. (There’s also a lot of bureaucracy at banks, which makes it harder to move quickly.) If you work at a bank, we suggest taking a look at our recent white paper, 4 Trends That Could Make Canada a Leader in Financial Innovation, which goes through some of the ways banks can become more innovative.

Here’s a little insight on each trend, but read the report for more details.

Open banking could revolutionize financial services by allowing fintechs to interact more freely with banks. Banks will then be able to offer a variety of new products and make their customers’ experiences that much better and vice versa. Banks will need to more openly share client data with third-party companies, though, which they have so far been reluctant to do. It’s up to the banks if they want Canada to lead or lag on open banking.

Banks will need to be privacy leaders if they want to innovate in a bigger way. Fortunately, Canada already uses a proven authentication and digital identification system in place called SecureKey. It’s what Canadians use to log in to their MyCRA accounts. There’s no reason banks can’t use SecureKey across their business and then interact with fintechs in more secure ways.

A modernization of the world’s payment systems is underway, but Canada can lead the charge. If everyone adopts ISO 20022, a revolutionary messaging standard that makes it easier for computer systems and settlement networks to share payment-related information, then transactions between banks and businesses will become that much easier. Payment files also contain a lot more data, which will then make it easier for banks to process transactions more quickly.

At some point, all companies will offer financial products to their customers directly from their apps or programs. If banks don’t embrace open banking now, then other firms will take their place. The ones who have a fear of missing out – and they all should – need to think more broadly about how they can offer products in a more distributed world.

These aren’t big things for banks to tackle. They’re already thinking about authentication and payments, and open banking is not a new concept anymore. If Canada’s financial institutions embrace these trends, then our country’s status as an innovation laggard may finally change.

When thinking about countries like Australia, Japan and the United Kingdom, in many ways they seem...
Read More

Corporations have been demanding for years that the industry fundamentally transform the way it...
Read More

How foreign banks are shaking up commercial banking in Canada