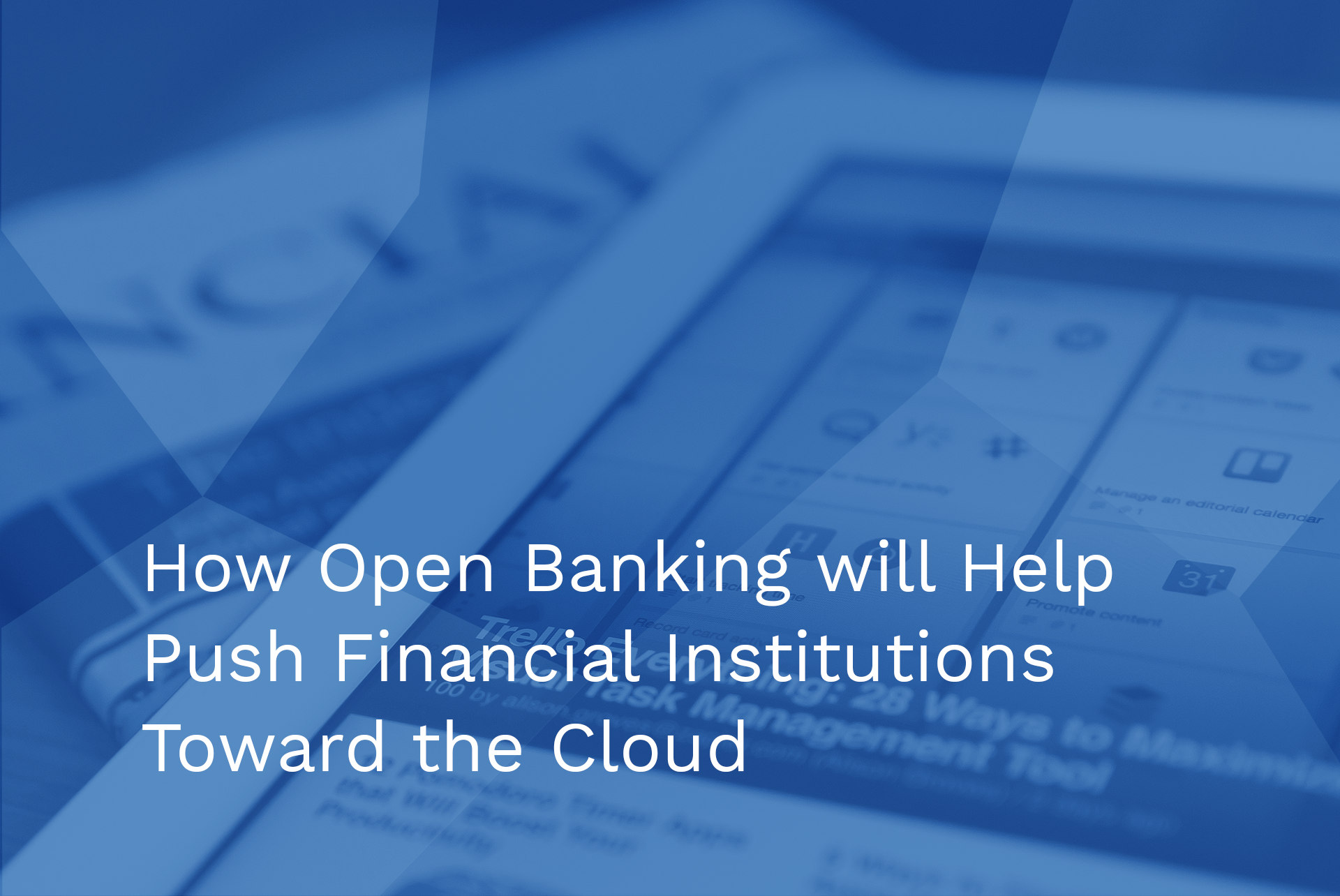 How open banking will help push financial institutions toward the cloud

Banks may soon need to share information with other financial institutions. That will cause companies to finally embrace the cloud.

At some point over the next few years, banks will have to give up control of the client information they now hold under lock and key. They’ll have to share financials, credit rating information, product preferences and more with other financial companies – competitors and FinTech startups – and give customers the ability to hand their data over to whomever they want. Seems far-fetched? Then you haven’t heard of open banking.

Open banking may sound like a FinTech buzzword, but it’s actually about giving consumers control over their financial data. Right now, if someone wants to open an account at another bank, they have to do the same tedious paperwork they did when they opened previous accounts. If they want a business loan, they have to take whatever interest rate their bank gives them instead of shopping around and finding the most competitive rate.

With open banking, that business owner might open the app of a third-party lender and request a loan. That company would then ask the entrepreneur’s bank for their financial information – it’s all done via an API – and receive it in an instant. The lender would then present a rate right away, which the owner could then accept. The loan would then get transferred into their account. Or, imagine if individuals could instantly get approved for a mortgage instead of having to fill out reams of paperwork. That’s possible in an open-banking world.

Banks around the globe have been resistant to open banking, in large part because they don’t want to make it easier for people to open accounts, take out loans or interact with other companies. Yet, there’s plenty in it for them, too. It will open up a whole bunch of new partnerships – maybe that lender can provide products through the bank that the bank can’t offer itself – and it will create a more enjoyable customer experience.

One of the benefits of open banking is that it will cause financial institutions to finally look at cloud computing as a viable alternative to on-premises servers. For too long, banks have avoided shifting their own processes and programs into the cloud. According to a 451 Research survey, only 18% of financial services organizations and banks are fully deployed on the cloud, while 70% of respondents said that their cloud projects are only in the initial or testing phases – but they’re going to have to embrace it when they adopt a more open banking system.

Why? Because the information shared between institutions will be done virtually, over the cloud and through APIs. That third-party financial company, which will likely operate in the cloud, will send a message to the bank requesting information. The data will then be quickly and automatically sent back to that other business, all via virtual servers.

This is a benefit to banks, even if it may not seem like it at first. Cloud computing makes it easier to innovate, it allows companies to be more responsive to consumer needs and, through open banking, it will make it easier for companies to offer a wider range of services.

Don’t get left behind

At the moment, open banking remains more of a concept than a reality. Governments in the U.K., the European Union and Australia have created legislation that forces banks into open banking – they weren’t going to budge otherwise – but the rollout has been slow and complicated. Canada is looking into open banking, too, but it hasn’t mandated anything yet.

It’s only a matter of time, though, until banks do share information – consumers will demand it. They want more seamless financial experiences, and they want to bank and transact with ease. As people use a greater number of cloud-based apps and programs – whether it’s Uber, Lyft, Airbnb or Skip the Dishes – they’re going to expect a certain kind of service. Waiting days for a mortgage approval isn’t going to cut it.

Banks should jump on the open-banking bandwagon now, before they’re either forced to do so or get left behind.

Want to learn more about this topic? Download our whitepaper: Why Banks Must Adopt The Cloud or Risk Being Left Behind.

When thinking about countries like Australia, Japan and the United Kingdom, in many ways they seem...
Read More

Too many financial institutions have been slow to embrace open banking. Here’s how to get on board...
Read More